Well, it just kept bugging me.  And I said to myself, leave well enough alone, or you'll screw it up completely.  I tried, I swear I did, but that's just not how I'm made.  In the end, I knew I would never be satisfied until I at least made an attempt to fix it.  This is what I'm talking about: one of the pieces in my "The Traveler's Tale" series.  You can see others here, here, and here. 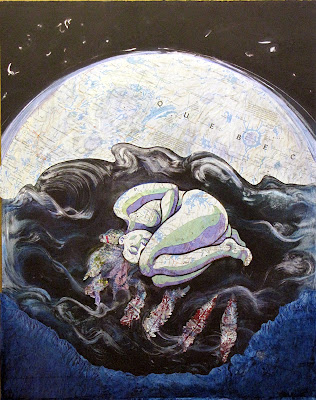 Here's the first version.  Well, to be completely honest, it would technically be the second; this was originally an old monotype that I decided to recycle.  At this point, it still felt unfinished to me, so I made a few changes: 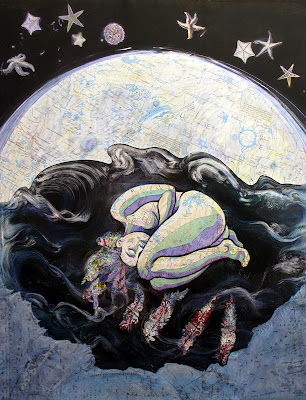 I warmed up the white in the figure, because I thought she needed to look a little less frozen (or dead?).  The blue wave at the bottom was so dark that, visually, there was nothing to hold the eye from sliding off the page, or to bring it back up to the figure.  Lightening it seemed to anchor the composition somewhat.  I added the starfishes to the sky.  I then pronounced it "finished", and put it away. 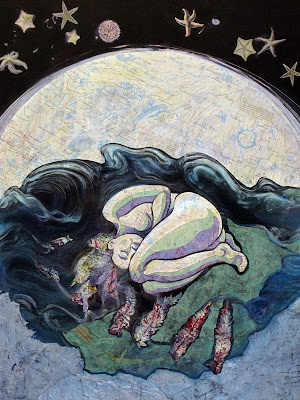 This is the part where I started wasting a huge amount of time and effort, because I felt it wasn't finished.  This is kind of embarrassing, but maybe you can learn something from it; I know I did.

The first thing I did was to cut a little off both sides, to bring the focus in closer to the figure.  What bothered me most about it, though, was that it had a "velvet Elvis-y" kind of feel, and overall was far too contrasty.  I thought it might help to lighten the value of the water surrounding the figure, so I added some green paper which appeared to be pretty translucent- until the glue dried.  It turned disgustingly pastel-ish and opaque.  It's hard to tell from the photo just how horrible it was, but trust me- yuk!

Next, I tried a blue paper, but it was even worse (you can see a bit of it above on the right side).  Apparently I neglected to take a photo of this stage, probably due to being distracted by intense frustration. 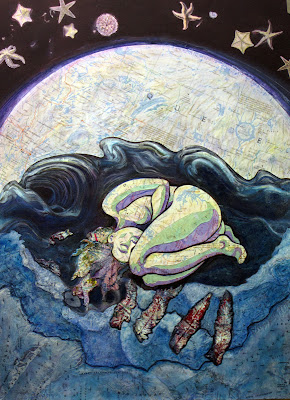 Next step: rip and scrape off as much of the paper as possible.  At a complete loss for any idea to keep this disaster from snowballing, I could come up with nothing other than to cover it with more of the blue ocean map.  Once I had done that, it became clear that it was too light, and therefore not helping the contrast problem at all.  Darkening it seemed the only solution, so I added layers of acrylic ink until I thought the value was dark enough (you can see this below).  Problematically, the map didn't absorb the ink well, instead building up a gloppy surface somewhat like a floor that's been waxed too many times without being stripped.

At some point I also realized I had forgotten the bird.  All the pieces in this series must have a bird- it's symbolically important for the narrative.  I actually did two birds.  The first was a total fail; the second was okay, except for the color I chose for the lighter value.  Oh well- that hardly mattered now, with the whole thing such a mess.  What to do? 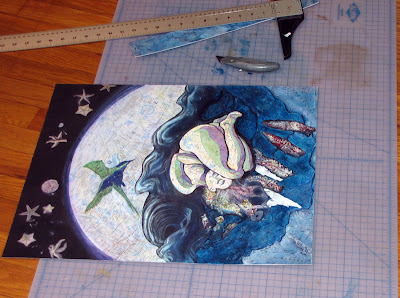 When in doubt, chop off another piece, of course.  Truthfully, I don't recommend this- I was desperate.  After that... well, cover up that gloppy blue somehow.  Also, I really wasn't fond of the way the water was cut up into pieces.  I was digging around in my flat file for a piece of silk tissue, and having no luck finding it, when I came upon some ogura lace paper.  Why not?, I thought, and proceeded to glue it on over the map.  I then used a purple map to cut new pieces for the bird, and glued it over the green. 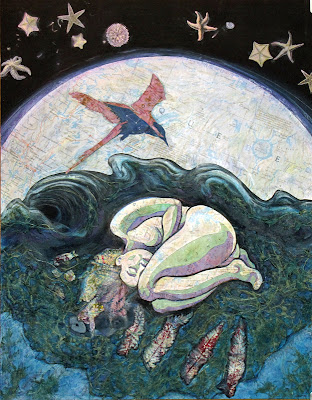 Interesting.  I think it's an improvement, and at least I don't hate it.  So this is where it rests- unless I take a notion to screw it up some more...

Note to self: Try to leave well enough alone.