Where Wings Come From

When I was a child, I was not very good at discerning what was real from what wasn't.  My parents often remarked that I had "lots of imagination." In some ways, I suppose it could have been an advantage, as I'm sure it must have been a large part of whatever combination of influences and  natural proclivities ultimately made me choose the life path of an artist.  I would lay awake at night, convinced that there were all sorts of monsters inhabiting my room. After finally exhausting my parents' patience, I knew there was no use calling them for help; grown-up eyes were obviously unable to see these creatures, and they were no doubt bound to tell me to go to sleep, because there was "no such thing" as monsters.  And though I tried very hard to convince myself that my parents were right, the monsters disproved this theory by continuing to appear in my room after dark. 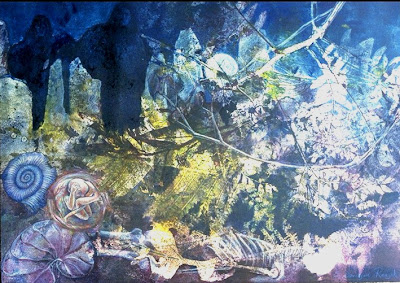 Callanish Stones on All Souls Night 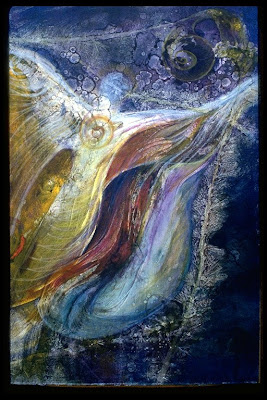 
When I was about six, my next door neighbor and so-called 'best friend' revealed to me that I was actually an alien from another planet who had secretly been left here and adopted by Earthlings - the man and woman I now mistakenly regarded as my parents. Soon, she said, my real alien parents would return for me, snatch me from my bed at night, and take me back to my home planet.  Absurd as it seems, I believed her. I did not tell my parents about this - I don't remember why - but I must have driven them crazy with my frequent nightmares and tearful pleas to sleep in their room. I don't know how long it was until I got over this fear, because as we all know, child years and adult years are not at all the same, but it felt like a very long time to me. 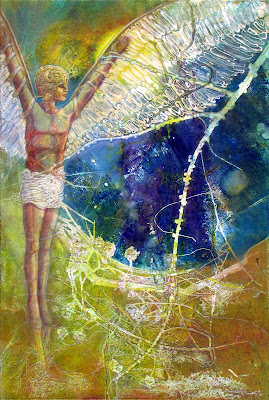 
I was thinking about all of this today because I have started another piece depicting a person with one wing. It's a theme/motif I've been working with for many years, and is for me a deeply personal symbol of my inner self.  I knew these winged or half-winged figures were emotionally connected to me, but at first I thought they were just a representation of my favorite fairytale, Hans Christian Anderson's "The Wild Swans", which I had read over and over again as a child. 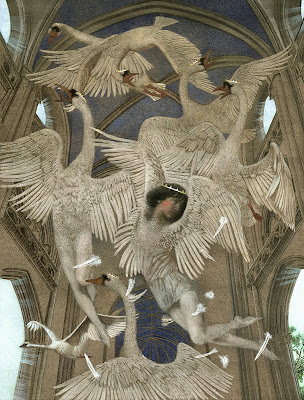 A wonderful illustration from the story, by Russian illustrator Nadezhda Illarionova.

Here's a short summary, if you don't want to read the whole story, but it basically involves a girl whose 11 brothers have been turned into swans by - who else? - their wicked stepmother.  A fairy tells their sister she can reverse the spell by knitting shirts out of nettles for her brothers, but of course everything goes wrong, and she has to dress them in the shirts before the last one is finished, leaving the youngest brother with one wing instead of an arm.


At some point, I realized that that, subconsciously, the one-winged figures represented more than an attachment to a favorite storybook character; on some deeper psychological level, I identified with them.  Too bad Carl Jung's not around to figure that one out, I thought. I briefly researched Jung's archetypes, but none of them seem to shed any light on this. Perhaps I unconsciously see myself as  not fully human; it's true that in many ways animals make more sense to me than people do. Some sort of transformational process feels closer to the mark, though; maybe it represents the hope for change, a desire to become something better than I am. Or, could it be that my neighbor's alien theory wasn't so far off after all...? :~) 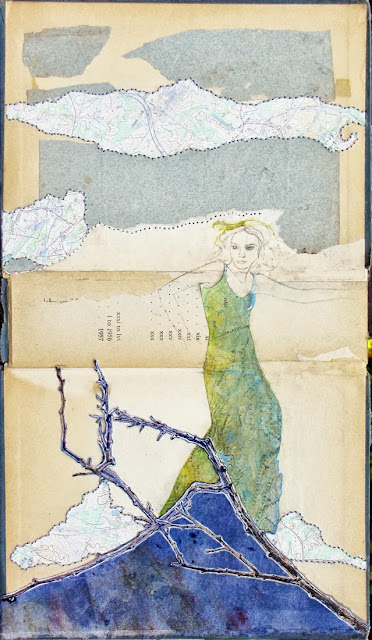 No, she doesn't have a wing yet - but stay tuned; I will post any further progress as it happens. 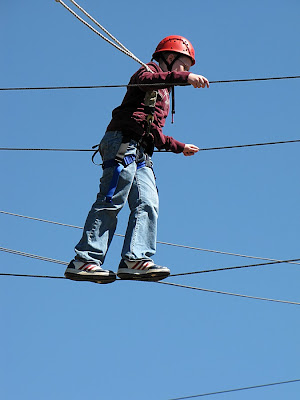 Well, it's the beginning of a new school year, i.e. "real job" (thanks to Deb Eck for that terminology) which has, of course, gotten me thinking about lessons. My great hope has always been that somehow I'll be able to teach my students something that they'll take with them, just one little thing that might benefit them for the rest of their lives. I'm not talking so much about academics as I am about how to live -  how to become the person they truly want to be. It may be a pretty tall order, but it seems to be what they need more than anything. 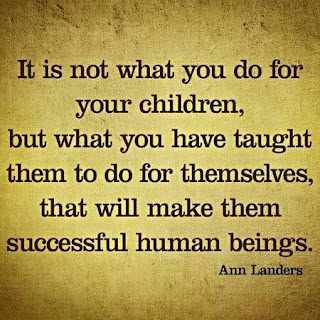 Here's an example. Back when I used to teach art, one of my greatest sources of frustration was the students' wastefulness. They would draw one line in the middle of a piece of paper and then say, "I messed up. I need another piece of paper." This would inevitably lead to Lesson # 1: Why Paper Has Two Sides. You would think this would occur to them, but for some reason, it does not.
Unfortunately, there were always some who repeated their mistakes on both sides of the paper. I tried not to give out extra paper at all, but two pieces was the absolute limit. Of course, this became Lesson # 2: Don't Waste Paper, Because We Do Not Have an Endless Supply of Trees. 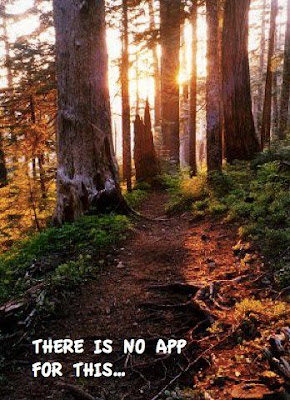 One day, a little boy who made a regular habit of this came and asked me for another piece of paper- again. I'm not sure if it was his first or second piece, but in my exasperation, I told him he couldn't have one.  "Think about it," I said. "You can probably figure out a way to fix it if you try." 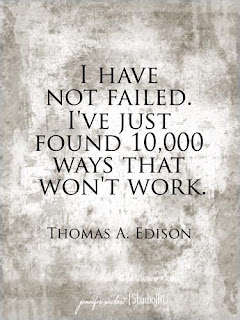 I promptly forgot about him, being very preoccupied with helping the other 28 kids who had their hands raised. A little while later, he came up to me with a big grin on his face. "Look! I fixed it!" He was very excited about it, so I can only assume that this was a new concept for him. It was then that I realized that he had learned something much more important than anything he would ever learn about art itself: Lesson # 3: Creative Problem Solving - Thinking About Things in a Different Way. 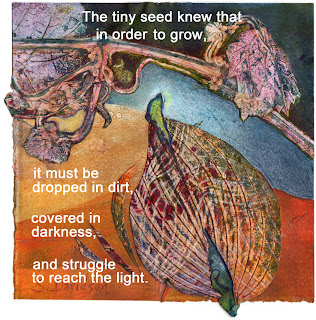 I'm not saying that this one experience changed his whole life, but it's possible that some little spark of a concept had entered his consciousness (or subconscious), and that in the future, instead of immediately giving up, he might be more inclined to look for other, more creative solutions. 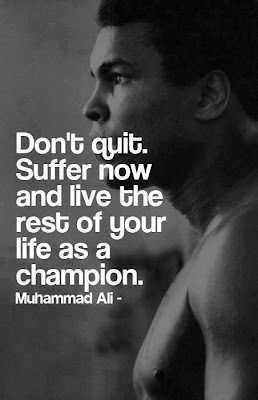 This takes me to Lesson # 4: Don't Give Up!  This is the hardest lesson for my students to learn, because I don't teach art now, I teach kids with learning and behavior disorders. My students are failed learners; it's a prerequisite for qualifying for Special Education. For the most part, they have already given up. And so I ask myself, How can I convince them to keep trying?  Why should they believe me when I say they have to persevere, if they have never seen the evidence? 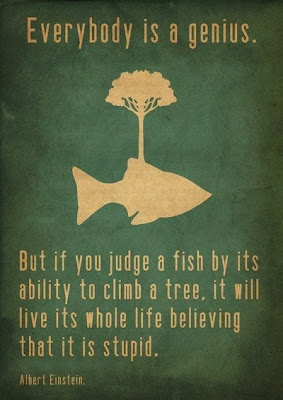 They don't have enough experience to realize that everyone is good at some things, and bad at others. They don't understand that most people who are good at something got that way mainly because they practiced - a lot. 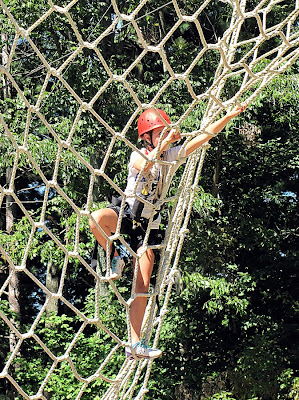 All they can see is that for them, every day is a struggle, and everywhere they look are people who are more successful at school than they are, without trying nearly as hard.  It's difficult for me to explain to them that everything we do in life has a learning curve, when their curve is so much larger than most. And how do I tell them that although they may someday get to do something they're really good at, they have to first make it through school? And that whatever that something is, they're probably not going to be good at it at first, but that they may indeed fail many times before that happens.

I'm pretty sure my students don't know who most of these people are, but it makes a case for perseverance, doesn't it? 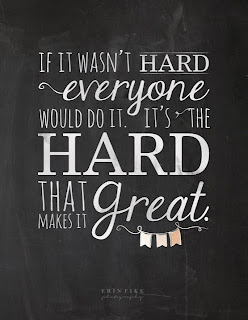