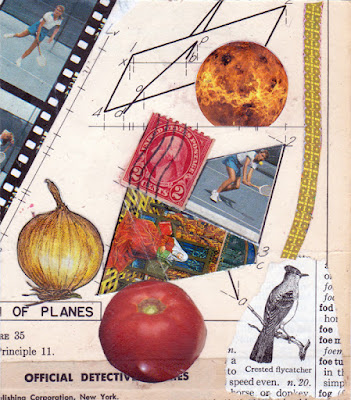 The world is round and the place which may seem like the end may also be the beginning.


I am always doing that which I can not do, in order that I may learn how to do it. 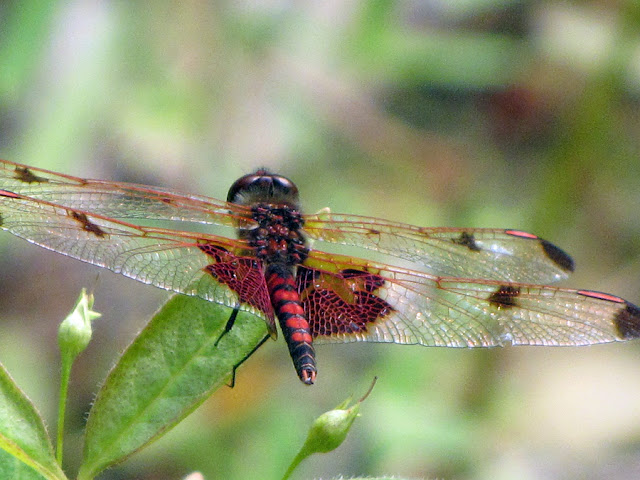 A tiny and delicate dragonfly... 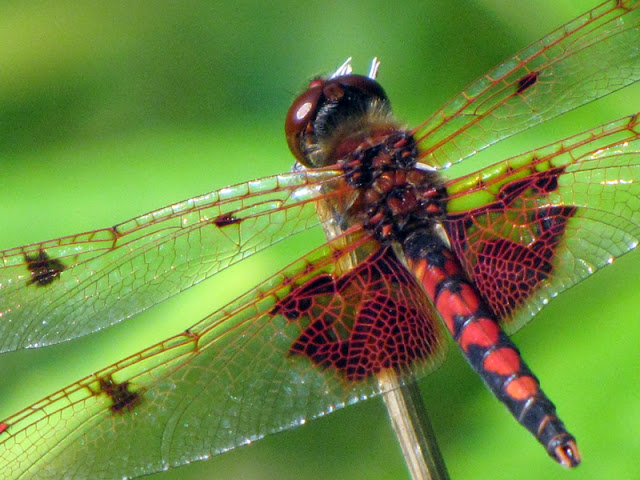 ...all red, black, and shimmeringly transparent... 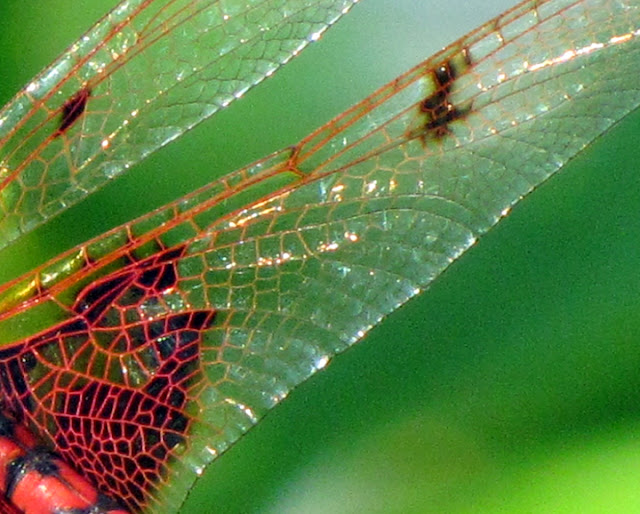 ...is delightfully beautiful from a distance,... 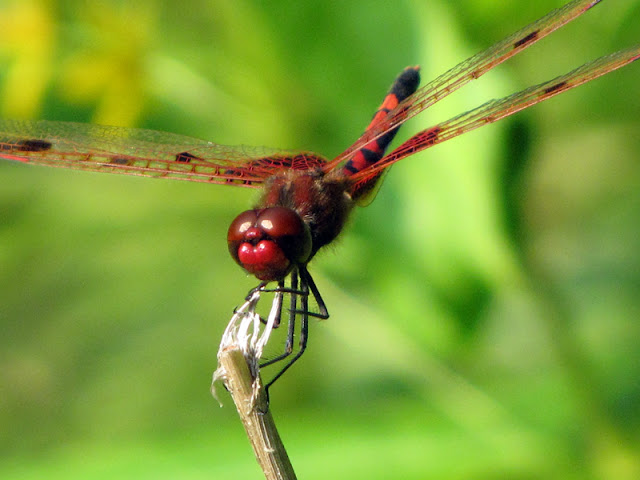 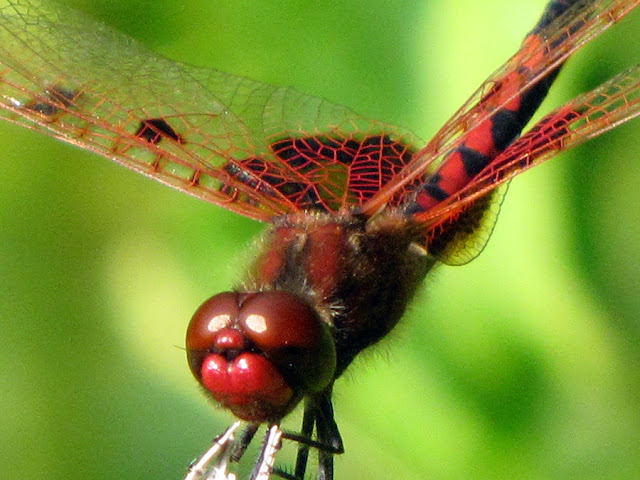 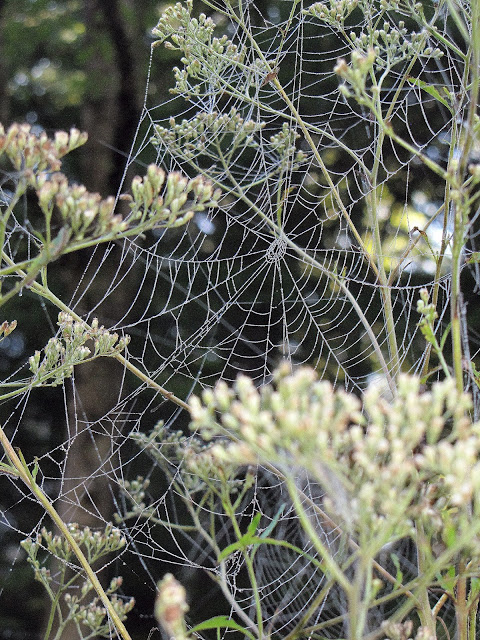 While something we might normally think of as creepy, such as spiderwebs, look like tiny strands of the finest silk... 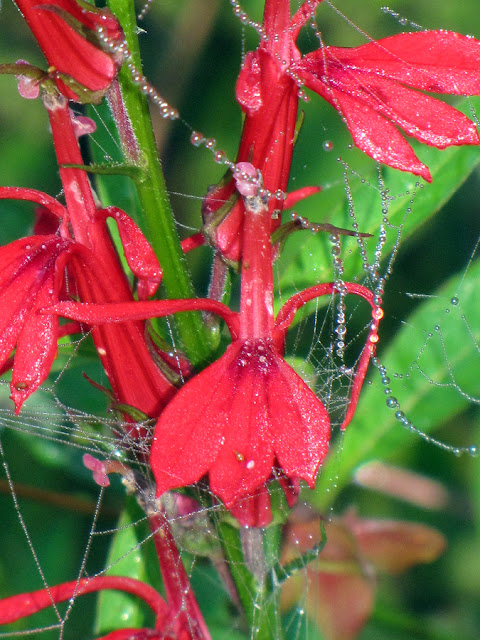 
For more interpretations of our "tiny" theme, go to Tammie's blog, Beauty Flows.

Also linking to: I Heart Macro

We have come to the end of the rainbow. (Hmmmm.... where's that pot of gold?) Luckily, our blog hop hostesses, Julie B Booth and Jennifer Coyne Qudeen, have not let that end our search; this month's color is brown. 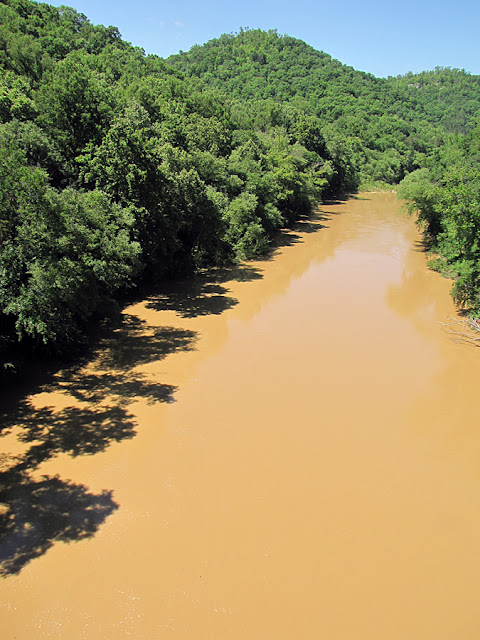 The Big South Fork of the Cumberland River was the color of cafe-au-lait after torrential rains... 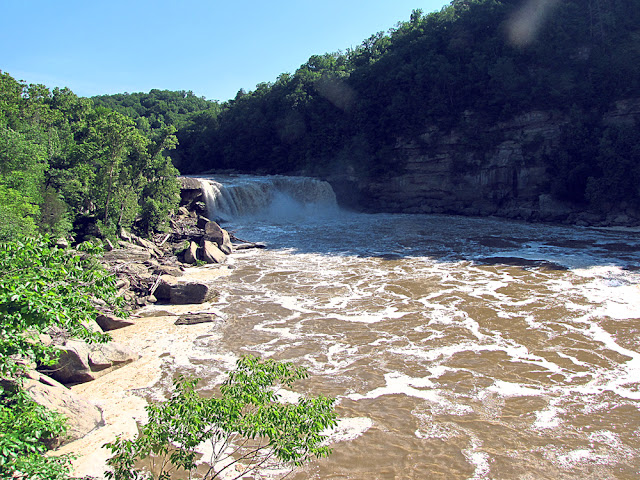 ... as was the Cumberland River right below the Falls. 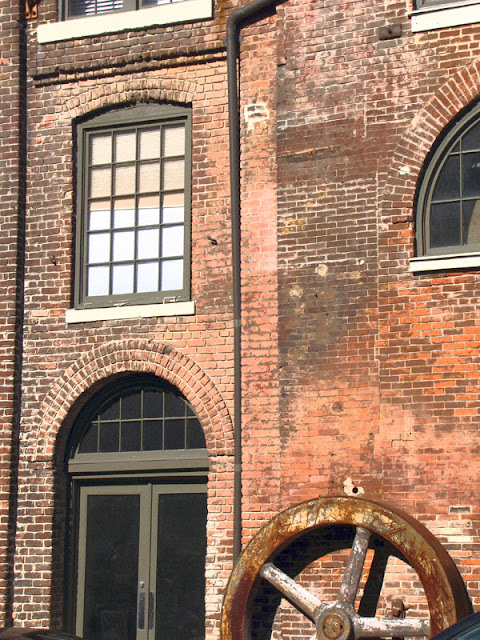 I love the character of this old building in Richmond, Virginia. 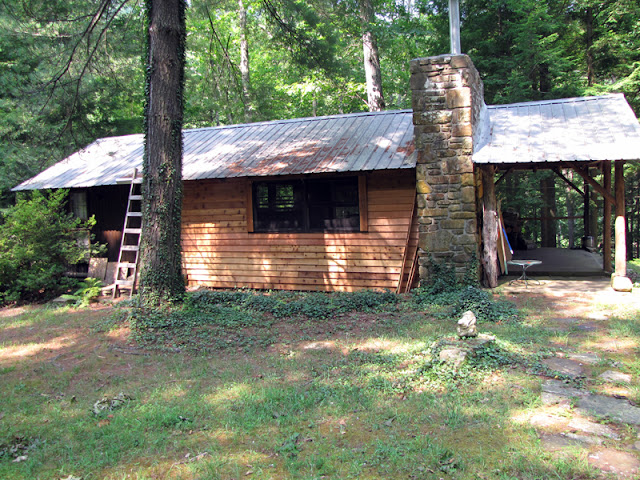 Our cabin out on the Kinniconick Creek as we put on the cedar clapboard.... 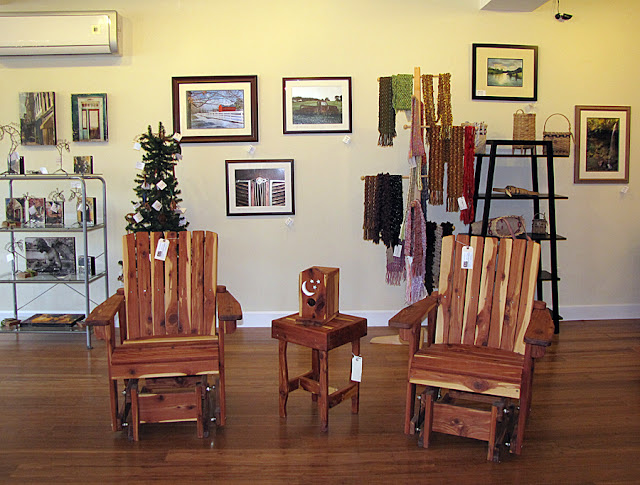 Beautiful hand-made chairs at the Kentucky Guild of Artists and Craftsmen Gallery in Berea, Kentucky. 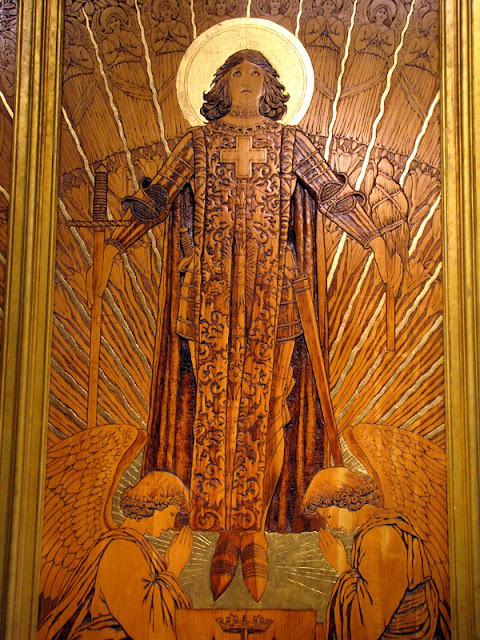 Gorgeous inlaid/carved wood piece at the National Gallery in Washington, D.C.  Unfortunately, I didn't take note of the artist's name.


I hope you enjoyed my browns. To see what other bloggers have in store, go to Jennifer Coyne Qudeen's or Julie B Booth's blogs for a list of links!

The word "image" leaves a lot of room for interpretation. But as I thought about it, something I saw on television a couple of days ago kept coming back to me. It was about a study which showed that the more makeup a woman was wearing, the more likely she was to be hired after a job interview. I found this astounding. Apparently, the more 'made up' she was, the more competent she was judged to be by the interviewers. 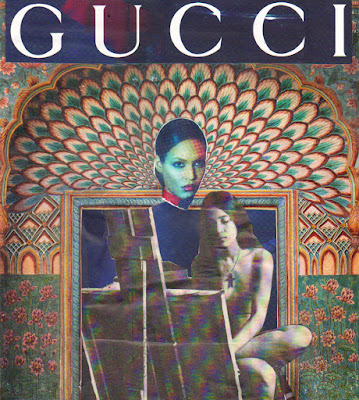 
Is the perception of a woman's worth strictly judged by how she looks? Is our goal, or should it be, to look like "the goddess of Gucci"?  Even the word "Gucci" is an iconic image in itself. Are women objects to be painted, to paint themselves, or to be painted on? How many of us have to "put our face on" before we go out?

Understand, I'm not advocating for women to stop wearing makeup.  But as a child of the sixties, I somehow thought, or hoped, that we had come further than this with regard to our culture's image of women. Now, I wonder if things have changed so much after all. What do you think?


To see more interpretations of the theme "image", go to our hostess's blog, Tiny Woolf, and follow the links.


I have no idea what elephants dream about, but it probably isn't this!  Still, I had lots of fun making this crazy, whimsical piece. I hope you enjoy it! 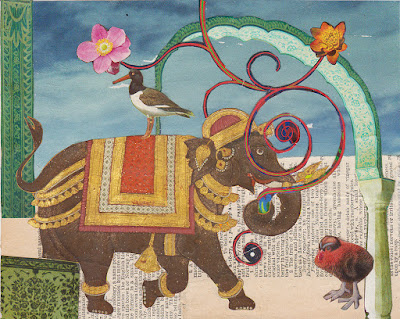 “I believe in everything until it's disproved. So I believe in fairies, the myths, dragons. It all exists, even if it's in your mind. Who's to say that dreams and nightmares aren't as real as the here and now?”
~ John Lennon

“People think dreams aren't real just because they aren't made of matter, of particles. Dreams are real. But they are made of viewpoints, of images, of memories and puns and lost hopes.”
~ Neil Gaiman

“I dream my painting and I paint my dream.”
~ Vincent Van Gogh 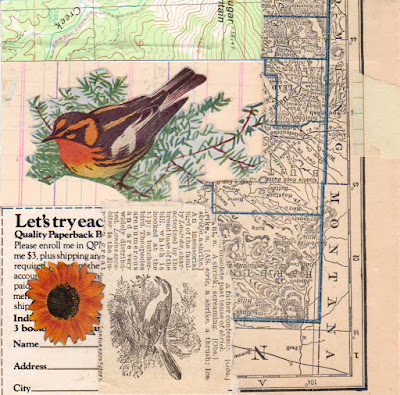 
If you're trying to achieve, there will be roadblocks. I've had them; everybody has had them. But obstacles don't have to stop you. If you run into a wall, don't turn around and give up. Figure out how to climb it, go through it, or work around it.
~ Michael Jordan


Don't let fear or insecurity stop you from trying new things. Believe in yourself. Do what you love. And most importantly, be kind to others, even if you don't like them.


Don't waste your energy trying to change opinions ... Do your thing, and don't care if they like it.
~ Tina Fey


Each mistake teaches you something new about yourself. There is no failure, remember, except in no longer trying. It is the courage to continue that counts.
~ Chris Bradford

New Piece, But Not Really 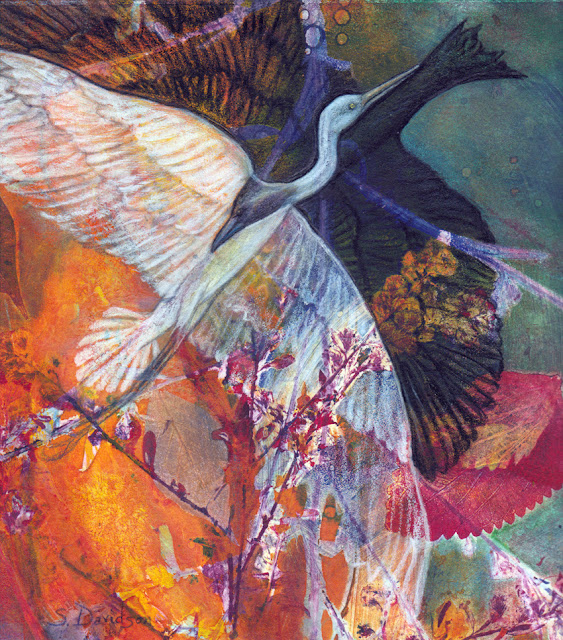 The Separation of Heron and Crow II
monotype with mixed media, 9.5 x 8.75 inches


I finished this piece a while back, then totally forgot to post it. This only occurred to me recently (like today). Although I don't like it as well as version I, there are many things I do like about it, and it was lots of fun to do.

In case you're not a long-time reader of my blog, I should probably explain that the 'Heron and Crow' pieces were originally intended to be illustrations for a book I was writing. The writing, however, has proven to be very difficult, and I'm not at all sure that my idea will make a good story in the long run. But I really enjoyed making the original Separation of Heron and Crow, as it's now called, and liked the idea so much I decided to try another one just for fun.


The basic premise of the story was that we need both day and night, dark and light, land and water, etc. - that we need opposites to create a balanced whole. I attempted to express this idea through the overlapping and positive/negative mixing of the black and white birds, who are the main mythical characters in the story.  I thought that one aspect of this piece that lent itself to the theme was the bright background behind the Heron, while the darker background is behind the Crow.

Let me know what you think!