Inspiration When We Need It Most

I hope this post won't offend you or bore you, but it might.  I wrote it, mainly, as a reminder to myself, and for anyone else out there who may need it. 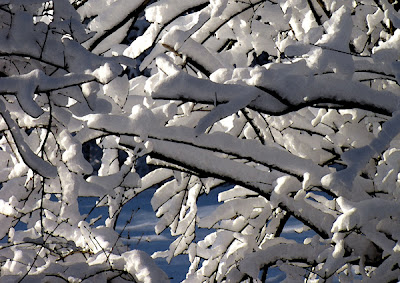 Can't see the forest for the trees

Sometimes things just don't go the way they should, or, rather, I should say, the way we think they should. This winter has been one of those times. My closest friend struggles to come to terms with the senseless death of someone very close to her.  Another friend has a severely disabled husband to care for, without the financial means to do so. My problems are small compared to theirs; I continue to add to a collection of health problems brought on by a job that becomes more and more stressful each day, and can't seem to find a way to resolve the situation.  Yesterday I learned that someone from whom I should be able to expect support had made some very negative comments on my yearly evaluation. At first I was hurt and angry, but I've been through enough in my life to know that these feelings won't do anyone any good- to say the least.  I recalled the Buddha's famous quote:

Seems a bit confusing, right? To illustrate, Pema Chodron tells the story of  the great Buddhist teacher, Atisha, who brings a very unpleasant servant with him to Tibet, because he fears the Tibetan people may be too nice!  Read more about it here. Or, to hear another explanation in Chodron's own voice, watch the video below.


I'm trying to internalize this idea and put it into practice.  In the meantime, the immediate challenges remain, and I'm no closer to figuring them out than before.  But just when I think it's time to give up, someone puts inspiration right in front of my face, quite by accident.  In this case, for instance, I had not looked at my notices from facebook, (which go to their own inbox apart from my regular email), in a very long time. I've just been too busy, too overwhelmed to even think about it. So, on this snow day, I was getting ready to delete all or most of the 854 facebook emails, when I thought, wait- maybe I should check first to see if there's anything important in there. The first thing I noticed was that I had missed a blog post by my dear friend Donna Iona Drozda. As I read it, I was so moved and inspired by the story of one woman's courage in the face of terrible odds, and by the beautiful art she made as a result, that I wanted to share it with you.


I saw a video of this little boy on the news the other night, and was amazed by his energy and positive attitude. You may have heard of him; his name is Robby Novak, but he calls himself the "kid president."  His PEP TALK cracks me up and makes me feel better, no matter what.

According to the CBS Evening News, Robby loves to dance, but for him, dancing can be a problem.  "Robby has osteogenesis imperfecta, a disease that makes his bones brittle. He has had more than 70 broken bones and 13 surgeries. He has steel rods in both legs.
But Robby says he doesn't worry about breaking things.
"I don't worry about -- like, that's my point!" he exclaims. "I'm trying not to worry about it. Like, I want everybody to know ... I'm not that kid who breaks a lot. Like, I'm just -- I'm just a kid who wants to have fun."

Oh, and I have to share one more Buddha quote, which may be my ultimate favorite:
“You can search throughout the entire universe for someone who is more deserving of your love and affection than you are yourself, and that person is not to be found anywhere. You yourself, as much as anybody in the entire universe deserve your love and affection.”
Try not to forget that.

Well, that's it- the end of the preachy post.  I hope it inspired you, but if not, next time I'll be back to the regular art stuff, I promise. 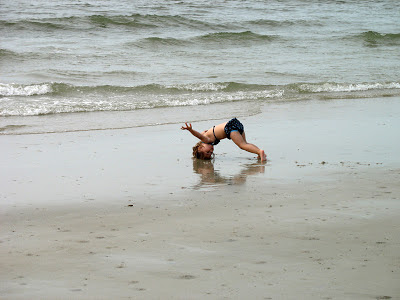 Once I started putting together my first post about using the dress as a format for art, I realized that there was far more amazing art in this category than I had first imagined, and that I couldn't possibly confine the subject to just one post. Maybe it's my inability to make decisions, but there were so many fantastic artists; how could I leave anyone out?  In reality, of course, I'm sure there are many who aren't represented here, as I can't know about them all- which is good, since I have to stop somewhere, right? 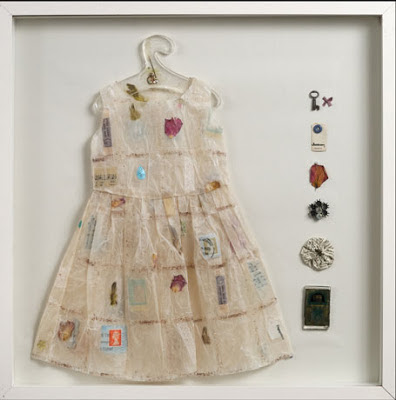 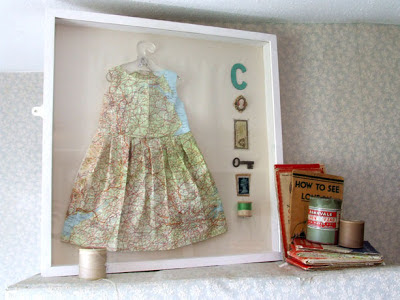 Jennifer Collier is an artist from the UK who makes art from paper, in the form of dresses and other clothing items. Her artist statement:
"My practice focuses on creating work from paper; by bonding, waxing, trapping and stitching I produce unusual paper ‘fabrics’, which are used to explore the ‘remaking’ of household objects. The papers are treated as if cloth, with the main technique employed being stitch; a contemporary twist on traditional textiles. The papers themselves serve as both the inspiration and the media for my work, with the narrative of the books and papers suggesting the forms. I tend to find items then investigate a way in which they can be reused and transformed; giving new life to things that would otherwise go unloved or be thrown away." 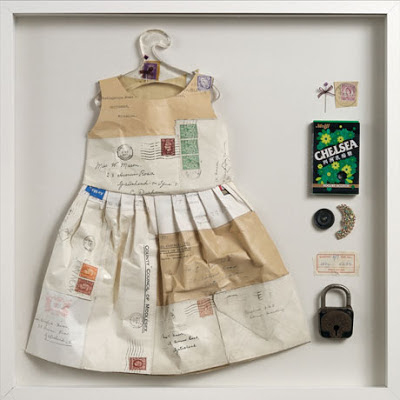 By presenting the actual articles of clothing as fossils, Diane Savona puts them in a new context, creating works of great beauty that are imbued with meaning. 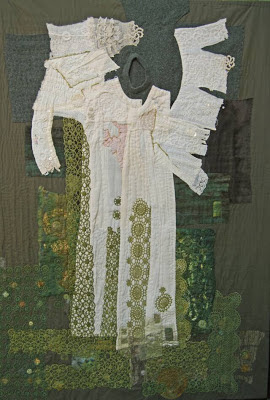 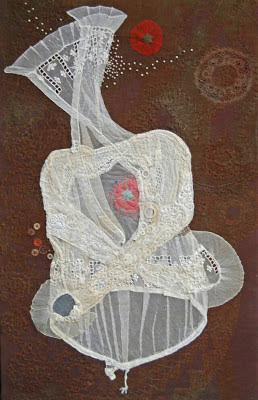 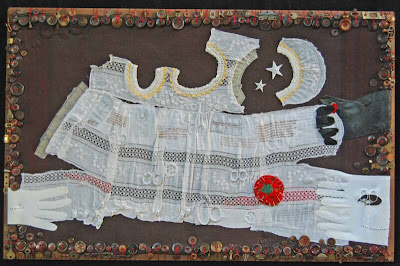 
I think She explains it best herself:

Marit Helen Akslen
Akslen was born in Alesund, Norway, and graduated in 2000 from the National College of Art and Design in Bergen, where she majored in textile arts.

"Through my work I seek to express something about social layers, power, and the abuse of power, and I have found it purposeful to use clothing or parts of clothing as my artistic material. Employing e.g. collars, pockets, and cuffs, men's white shirts have been central in many of my works. I have reassembled these fragments into other contexts in which they can effect new meaning", she explains. "In addition it has been of importance to me to treat these topics with some focus on gender." 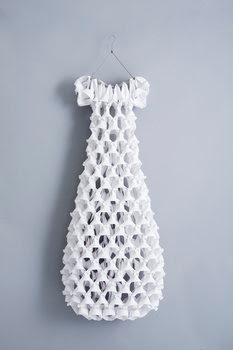 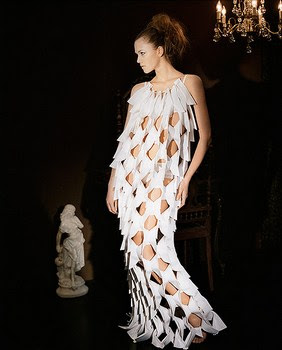 I'm not able to see these close enough to figure out how they're made; if anyone knows, I'm really curious to find out.

I'm particularly fascinated by the work of Leonie Oakes, whose work combines two of my favorite media- bookbinding and printmaking.  Dresses as books - makes perfect sense to me; in fact I think it's pure genius! 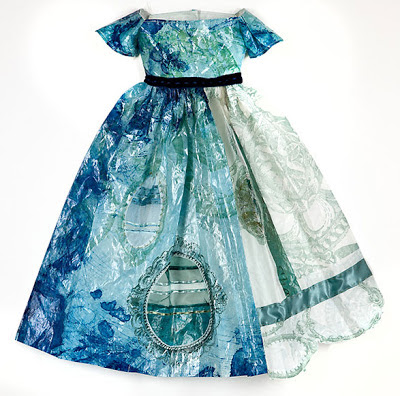 She Liked to Dream 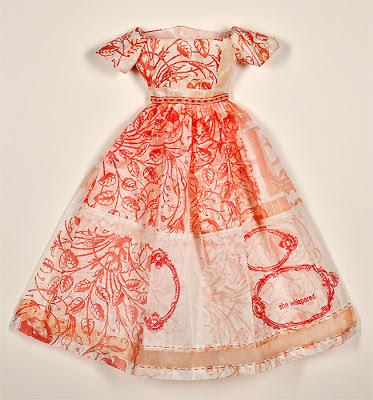 "Her practice includes a diverse range of bookbinding techniques from traditional binding to innovative and contemporary book techniques..." 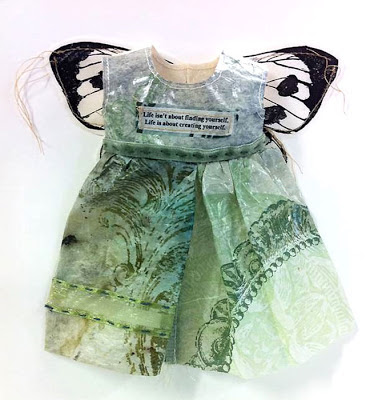 Life isn't about Finding Yourself...

"The central theme of her current work considers the notion that the book can be used visually as a vehicle to express the self and the female body. Oakes has considered the notion that traumatic experience can manifest internally and physically emerge like a hidden text unfolding. Leonie explains that she creates books as sculpture, as wearable objects, as props, as images and all as vehicles for the stories we all hold. The work reveals a fragmented and broken text, giving glimpses of the past rather than a full disclosure of the actual story."  (wickedhalo.com) 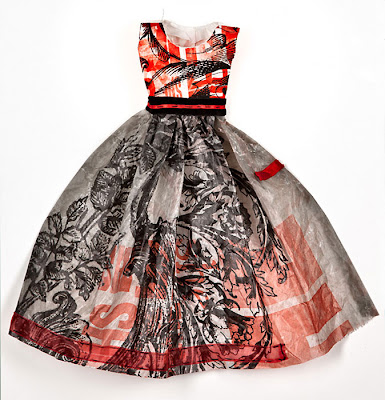 from "Weaver of Dreams" series 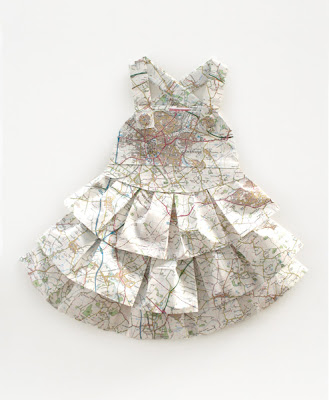 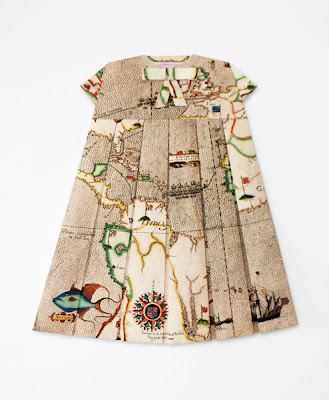 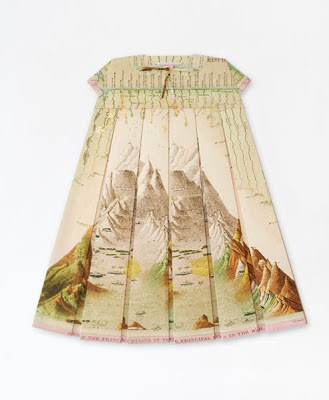 
According to her website, "Sensitivity and vulnerability are the main subjects in the work of the artist Elisabeth Lecourt.... the feminine figure is seen like the spine of her house, like an essential component of this particular world. But the woman like structure to medular can be a contradiction, because although funge like the strong part that maintains the building, is also vulnerable and touching. The vulnerability of the human being, the fragility of the bodies exposed by Lecourt proposes a painful beauty as well, as much by the emotional thing of the topic like by its own necessity to understand our body and what there is within us."

Peter Clark is an English collage artist who makes paper garments that are quirky and fun. He uses "old stamps, maps, love letters, labels, buttons, sewing patterns, and more that he has collected, to create his somewhat three dimensional collages. He starts by drawing the outline in felt tip and then carefully selects from his paper and fabric stash for the right materials, as well as colors, to define tonal effects and other features in his art objects."(artist statement, Rebecca Hossack Gallery) 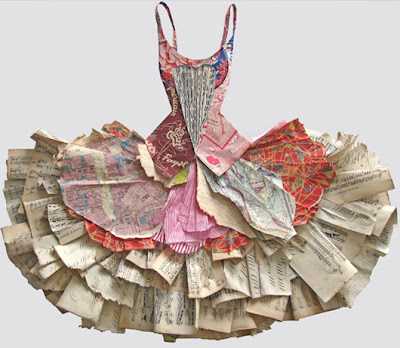 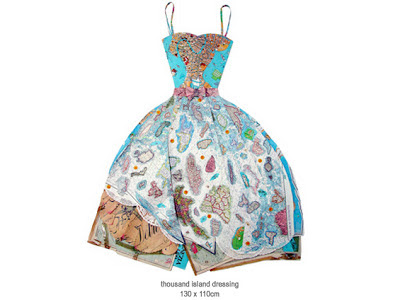 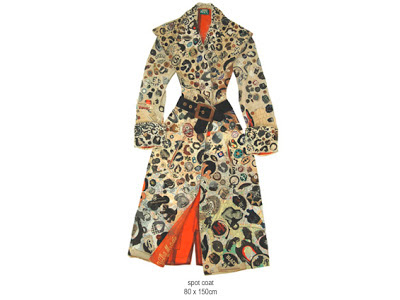 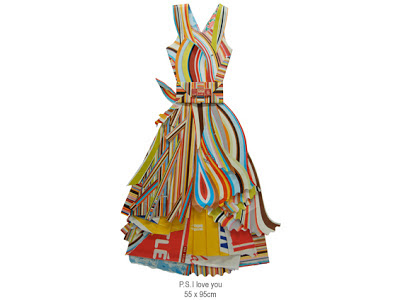