When I Was a Bird 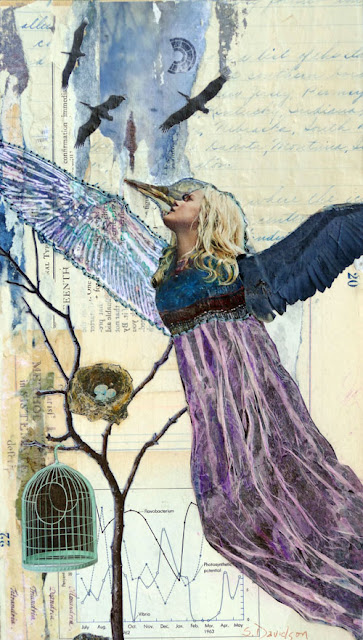 This one looks pretty much the same as the last time you saw it; I just added some stitching, the birds, and tweaked a few other things. Trying not to overwork it, as I sometimes tend to do.

You may have noticed that people with wings, angel-like figures, and girls with one wing appear frequently in my work. I tried to get to the bottom of this obsession in a past blog post titled, "Where Wings Come From", which you can read here if you're interested. Someone once said that all of the figures an artist paints are reflections of him/herself, and in some way, I believe this is true. 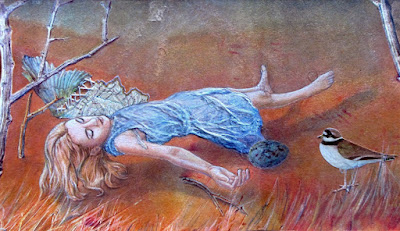 detail of first spread from my handmade book, Book of Dreams


Every artist dips his brush in his own soul, and paints his own nature into his pictures. ~Henry Ward Beecher 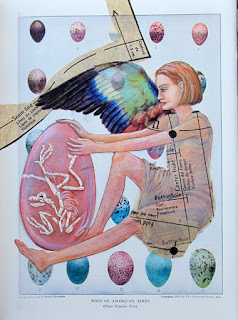 a page from Not an Open Book


In trying to find quotes for this post, I came across a very interesting website called Every Pianter Paints Himself: Art's Masterpieces Explained. The home page text states:

Every painter paints himself, a saying first documented in the early Renaissance, has been mentioned by artists ever since. Both Michelangelo and Leonardo da Vinci used it, as Picasso did too; Lucian Freud and other contemporary artists still cite variations today. Yet despite its great significance to artists, art scholars rarely discuss the saying or its meaning. Those who do seem to have no choice but to deny it: painters don’t really paint themselves, they say, but their sensibility. But why would a phrase that meant so much to great masters, and still does to their followers, require re-phrasing to mean anything? The truth is, as this website demonstrates, it is the images of these visual artists that are veiled, not their words.

Here's an example from the site where they discuss some of Basquiat's paintings in relation to his life. I plan to go back and read what they say about other artists and their work. Just something to think about, you know?

Despite drowning in a sea of product tags, focus keywords, alt attributes, meta descriptions, and SEO titles, I have managed to make a little more progress on When I was a Bird, a collage I had started for an art challenge a few weeks back. I took photos of it with my phone, and they did not upload to my dropbox. I have no clue why, but it is surely aggravating. So I took photos with my Panasonic Lumix, and couldn't get them to upload to the computer! Just one more thing, you know? But I have managed to grab little snippets of time here and there to work this collage, mainly to keep myself sane. Now, back to work, and maybe a bit of studio time! I'll keep you posted!