Art Comes From the Making

I've been doing some small collages lately, most of which I consider to be primarily "just" practice and experimentation.  It took me a long time to figure it out, but I know this much is true: art comes from the making.  My undergrad drawing instructor used to say this all the time.  At first I thought it made no sense at all.  Of course the art won't be there if someone doesn't make it!  It's like the phrase so many people are saying now, "It is what it is".  I mean, that goes without saying, doesn't it?   Taken for its literal meaning, it actually denotes nothing at all, but the connotation is that you can't change the aforementioned "it" - you just have to accept it and move on; it's a given.  There is an understood meaning associated with those words which amounts to much more than the sum of the words themselves.

OK, so what my instructor meant by that vague and seemingly meaningless phrase is that the only way to make better art is to keep making art.  If you're uninspired, make something; if you're blocked, make something; if you feel like giving up, make something.  Maybe it won't be great, or even any good, but if you keep going, it may, eventually, lead to something good (or even great).  Eventually.  In the meantime, you are honing your skills, and learning from each mistake, as well as from those things that, surprisingly, work out better than you ever dreamed they would. You'll take risks that you probably wouldn't take if you're thinking of it as a perfectly finished piece of art, and arrive at better ways of doing things.

I may have said all this before, but I think it bears repeating, mainly to remind myself of its fundamental truth.  For most of us, there are no shortcuts; as Einstein said, "Genius is 10 percent inspiration and 90 perspiration."  Don't sit around waiting for something to happen, for a bolt of creative lightning from the sky to enlighten you with some amazing idea.  It takes profound perseverance, hard work, and practice to achieve success.  So that's my little motivational speech to myself, and to any of you out there that may need one as well.   Or, if you're tired of hearing it, you can just refer it to the Department of Redundancy Department.


OK, I feel much better now.  So, here's my latest collage: 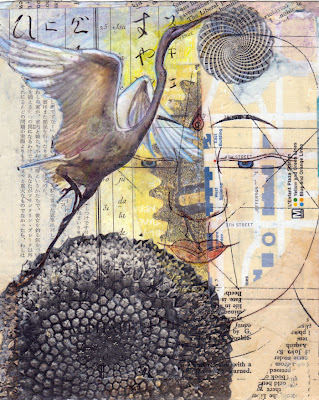 With that in mind, just for the heck of it, I decided to have another go at this one: 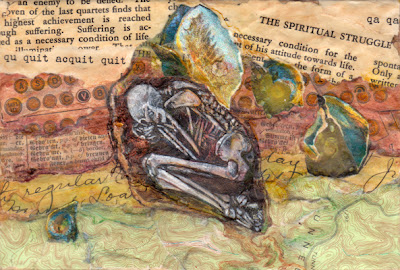 I am always doing that which I can not do, in order that I may learn how to do it.  -Pablo Picasso
Posted by Sharmon Davidson at 8:35:00 AM