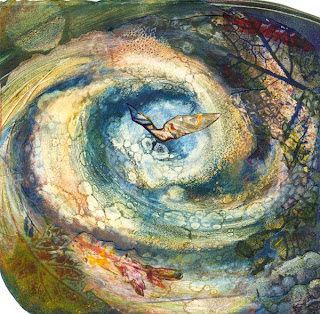 I finally finished this piece that I had started before I left for vacation. It's been a little strange transitioning back to "real life"; I just can't get the Rocky Mountains out of my head. I'm working on some other pieces, though, that I'll be posting soon.
Posted by Sharmon Davidson at 7:35:00 PM No comments:

I returned from a vacation in Glacier National Park, Yellowstone, and surrounding areas almost a week ago, but am only now beginning to get my head back down to earth. This was my first trip to the Rockies, and it was a truly transcendent experience. I can attest that I do feel changed by the mountains, in ways that I'm unable to put into words. 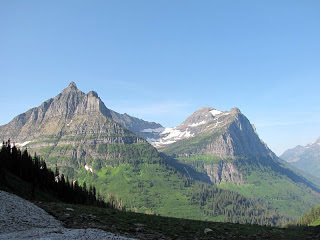 In my attempts to find a way to express this, I keep coming up with phrases like "clarity of being", or "a present stillness."
I feel like the mountains are somehow in my soul, and always will be. 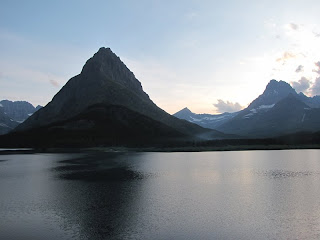 Even to my own ears, this sounds hokey and "new-agey", but I don't know another way to say it. 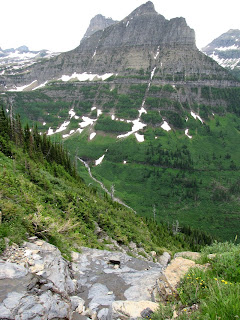 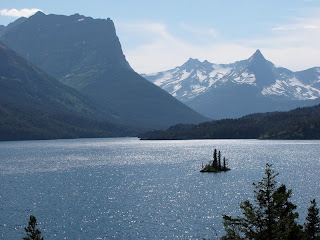 So will I build my altar in the fields,
And the blue sky my fretted dome shall be,
And the sweet fragrance that the wild flower yields
Shall be the incense I will yield to thee.
- Samuel Taylor Coleridge
Posted by Sharmon Davidson at 6:31:00 PM 2 comments:

It rained here all day yesterday, so most of the scheduled fireworks displays were kind of fizzled out. In their place, I decided to post a few photos from past celebrations. 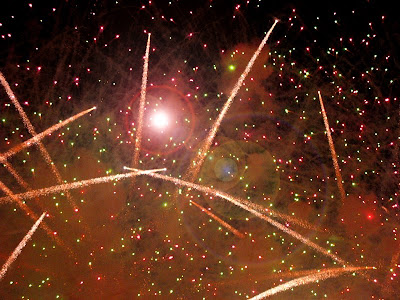 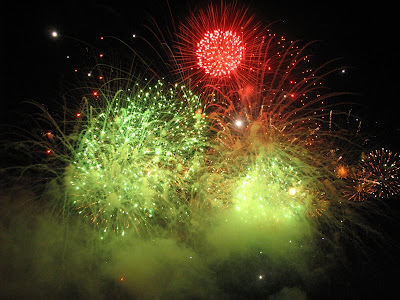 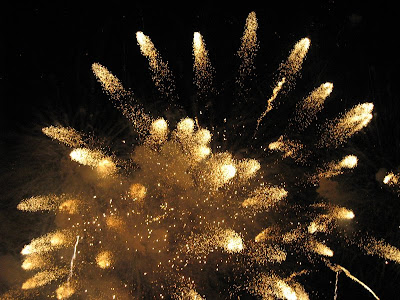 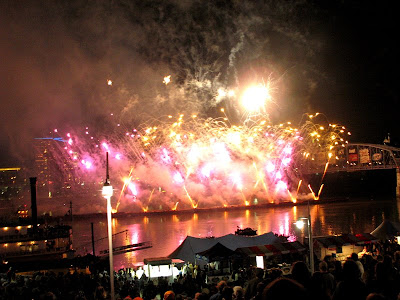 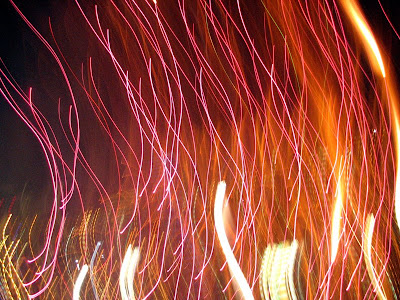 Happy Birthday, America!
Posted by Sharmon Davidson at 9:02:00 AM No comments:

Now I get it, Monet. 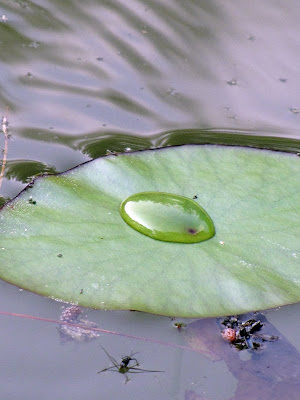 The last time I went to our place in the country, the pond had adopted some new inhabitants- water lilies. I'm pretty fascinated by water in general, as you may have noticed, and this development gave me a whole new angle on photographing water. 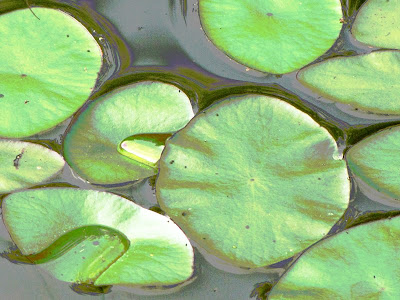 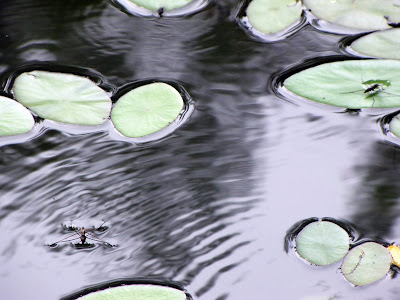 To be honest, I had never thought about why Monet painted waterlilies again and again. I guess I thought he painted them because, well, they were THERE. 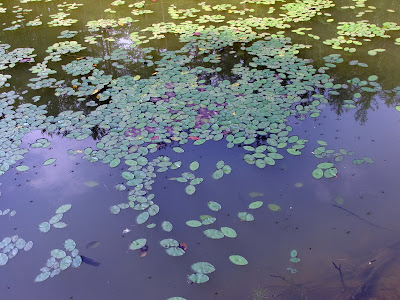 I do understand why he was drawn to water as a subject, though. The colors, the effects of light on its surface, reflecting sky, land, trees- it's an ever-changing and mesmerizing show. Water can move with great force, carrying huge trees as if they were matchsticks, or be as absolutely still as the surface of a mirror. The mysteries of its depths and the life within them captivate me. 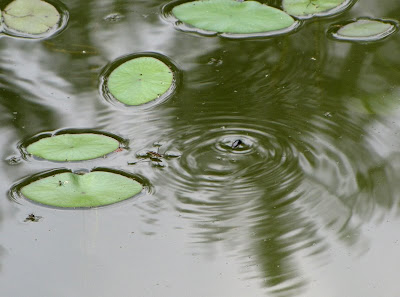 Water can appear as smooth as glass until broken by the undulation of a wave. Sometimes it looks like ice, or, oddly enough, jello. It encompasses three worlds: beneath, surface, and reflected above. Perhaps this is what gives it its magical qualities, often spoken of in fairy tales and other stories. 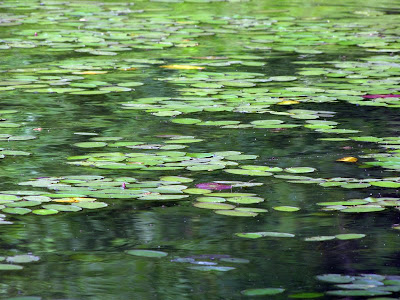 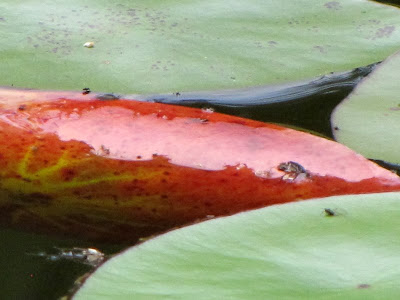 When I began to look at the lily pads on the water, I realized they were connected to the soil on the bottom of the pond by what appear to be long, thin strings. While I had always that they're green, in actuality they vary from yellow to green to red to purple. Moving with the liquid they rest upon, they float on top, and sometimes carry water themselves. 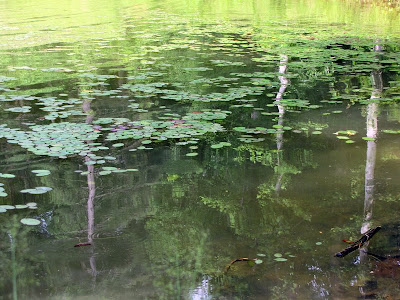 So I took bunches of pictures, not really expecting them to be very interesting. 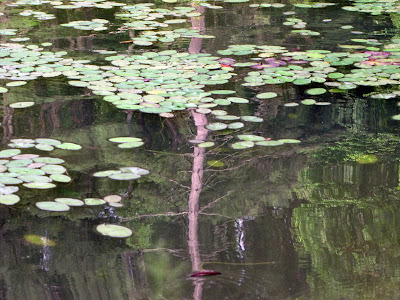 When I downloaded them onto my computer, I was completely amazed. Why Monet never tired of painting them, why he put them on canvases as big as the side of a house- I get it now.
Posted by Sharmon Davidson at 1:06:00 PM No comments: 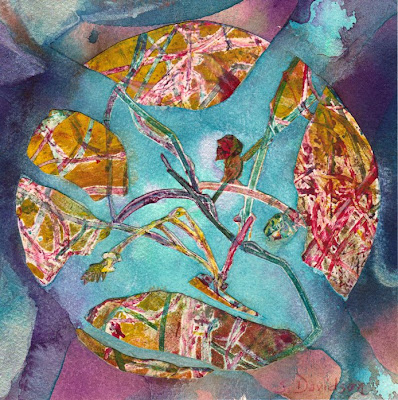 I just finished this piece, which I have been struggling with for some time. I have no idea why; it seems pretty simple and straightforward. Sometimes I think I can become too analytical, nit-picking and agonizing over every little decision. It can be difficult to just let go and be in the moment of creating. When I worry too much about the result ("Don't mess up!", as one of my professors told me), I just can't seem to get out of my own way. I always tell my students that making mistakes is nothing to fear, as long as we learn something from it. Words of wisdom, indeed. Remember: it's the process, not the product; it's the process, not the product...
Posted by Sharmon Davidson at 7:48:00 PM No comments: