Raven and Crane: Jumping Ahead in the Story

Some of you may recall that I began writing and illustrating a story some time last year.  The rough draft of the story has been essentially finished for a while now, but the illustrations have been put on the back burner because I just have so many other things going on.  The first two illustrations can be seen here and here.  The third illustration I've done is from further on in the story, due to the fact that it's actually the first one I did. 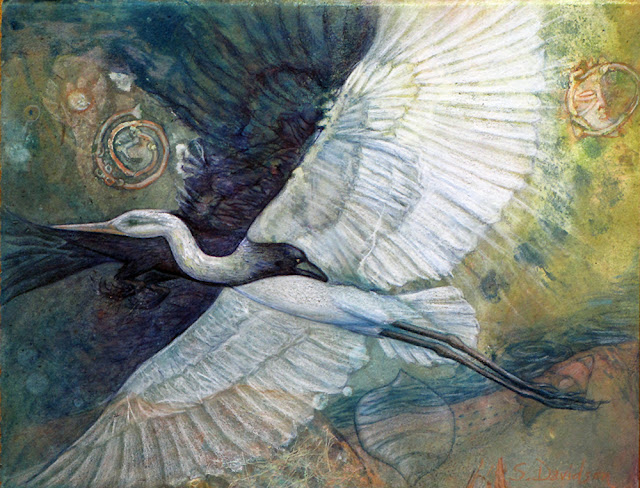 The Separation of Raven and Crane
As I worked on this piece, the story began to take form in my head.  Where it came from, I'm not sure; it's almost as if it had a life of its own, and was only waiting for me to put it on paper.  This piece depicts the point in the story where Raven and Crane decide to go their separate ways.  There are many things that happen in between, with illustrations that are yet to be done.  I have just started working on "Crane Creates the Day".
I decided to share this with you because I've entered these three pieces in an exhibit; if accepted, The Separation of Raven and Crane will be seen out of order anyway.   And who knows how long it will be before those in-between pieces will be created?  Not me.
Posted by Sharmon Davidson at 7:17:00 PM 21 comments: