The Silence of Sycamores in Winter 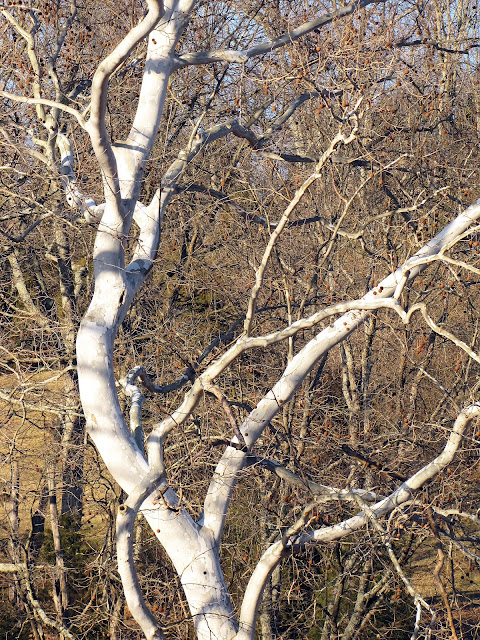 You can almost hear the absence of sound... 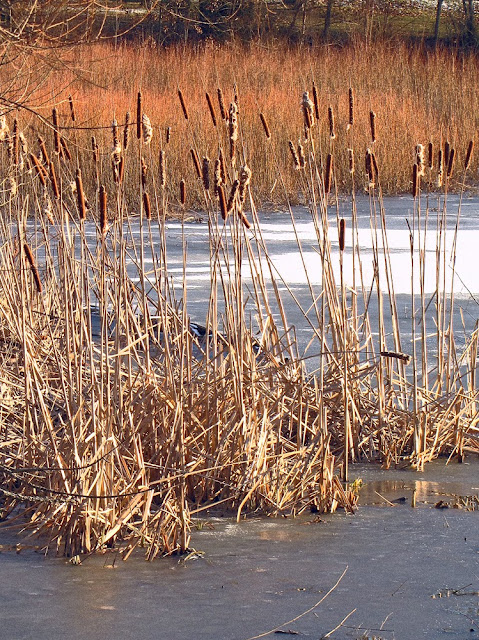 it speaks of winter sleep, 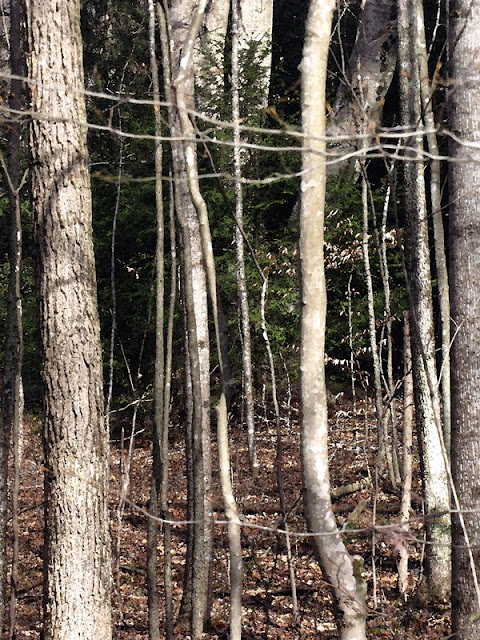 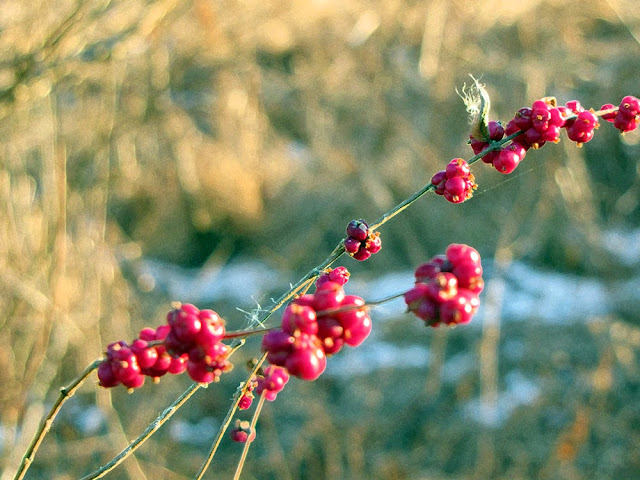 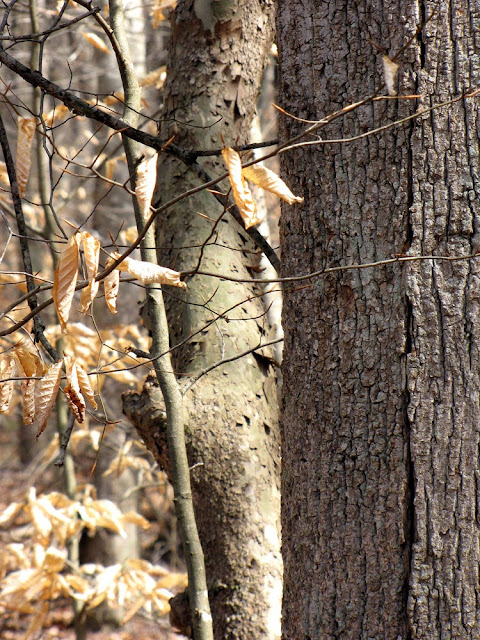 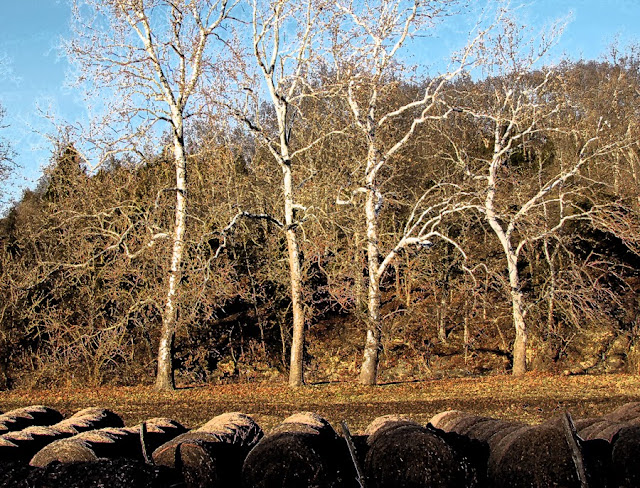 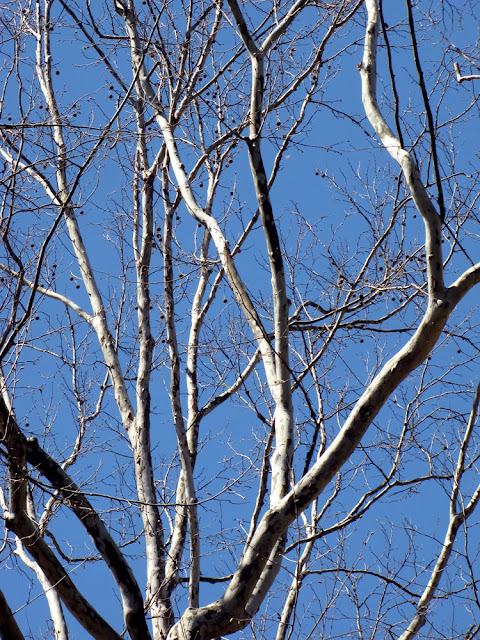 In the place that is my own place, whose earth
I am shaped in and must bear, there is an old tree growing,
a great sycamore that is a wondrous healer of itself.
Fences have been tied to it, nails driven into it,
hacks and whittles cut in it, the lightning has burned it.
There is no year it has flourished in
that has not harmed it. There is a hollow in it
that is its death, though its living brims whitely
at the lip of the darkness and flows outward.
Over all its scars has come the seamless white
of the bark. It bears the gnarls of its history
healed over. It has risen to a strange perfection
in the warp and bending of its long growth.
It has gathered all accidents into its purpose.
It has become the intention and radiance of its dark fate.
It is a fact, sublime, mystical and unassailable.
In all the country there is no other like it.
I recognize in it a principle, an indwelling
the same as itself, and greater, that I would be ruled by.
I see that it stands in its place and feeds upon it,
and is fed upon, and is native, and maker. 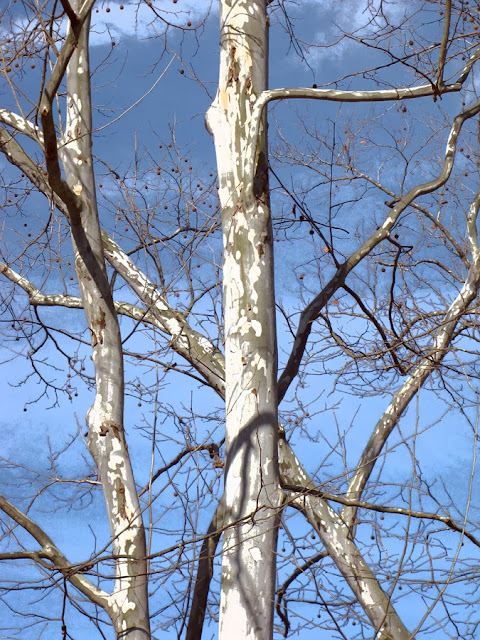 I hope you all had a blessed and joyful holiday, my dear friends, wherever you are.

The View From My Window 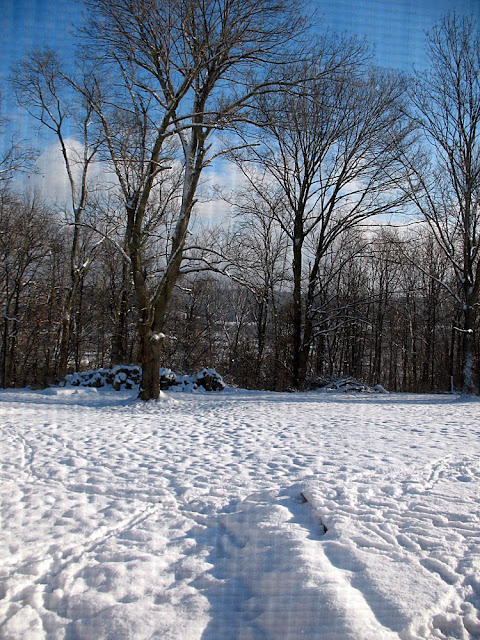 This is literally the view from my back window - you can see the screen - because it was so cold I didn't want to open the door or go outside. 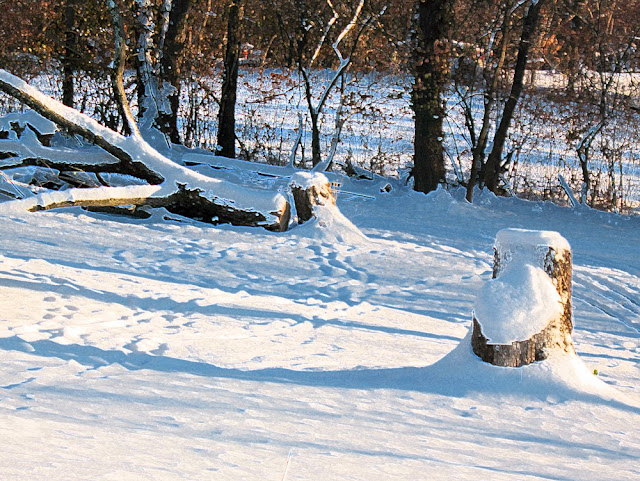 I was surprised yesterday morning when the phone rang, alerting me to the fact that school was closed.  I wasn't expecting this, nor did I expect to find another 4 inches of snow on the ground when I got up. 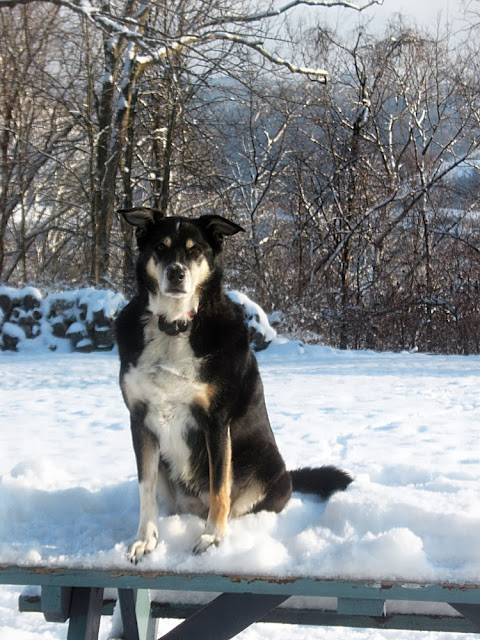 Scout was not pleased, as you can plainly see by her expression.  (She really does have facial expressions, odd as that may seem!)  I'm unsure why she thought the top of the picnic table would be any warmer than the ground; she was probably disappionted to find that it was not.


The gift of the extra time, plus sunlight reflected off the snow meant I could finally try to photograph one the pieces - now finished - from my previous post. It's not the greatest photo, being taken inside the house, but it still gives you a pretty accurate idea what the piece looks like. 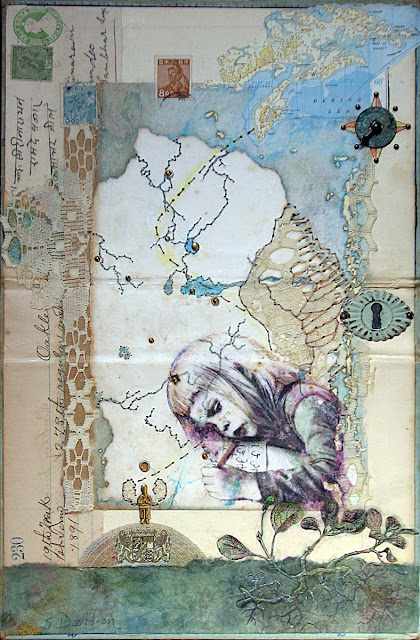 
I hope you're enjoying your weather, wherever you are!

Since I started working on several pieces at once, I've found my productivity has greatly increased.  This shouldn't come as any great surprise, of course, because it's really just common sense, but I was always afraid that if I had more than two pieces in progress at any one time, I might become scattered and unable to focus my energy on anything long enough to finish any of them. In the last year or two, though, ideas have been coming at me so fast and furiously that I feared I'd lose them altogether if I didn't at least get the pieces started.

Happily, this shift in my working habits has really worked out well, allowing me to work on a piece until I got stuck, then let it rest, ideas percolating quietly while I forged ahead with something else. I don't get bogged down or frustrated with one piece.  I don't obssess. To put it succinctly, I am wasting lots less time than I did previously.

I thought it might be nice to share some of this process by showing you what I was also working on while finishing The Spell is Broken. 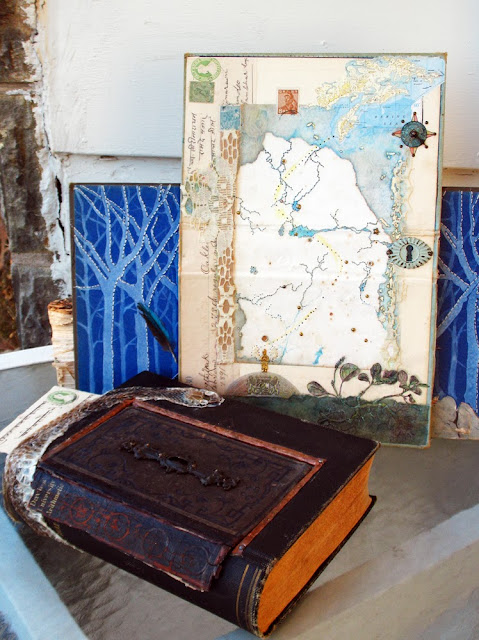 Here are three pieces I've been working on.  The tall one standing up behind the book is one that went oddly astray.  It might be due to the fact that I had no real clear plan, but only a nebulous idea of "an old map", which came to me while looking at a foxed and stained vintage book page.  The parts around the perimeter of the piece came together pretty quickly and easily, but the main focus - the map part in the center - did not. I knew I wanted the rivers to be done in embroidery, but had little else in mind.  I fugured something would occur, as it usually does. 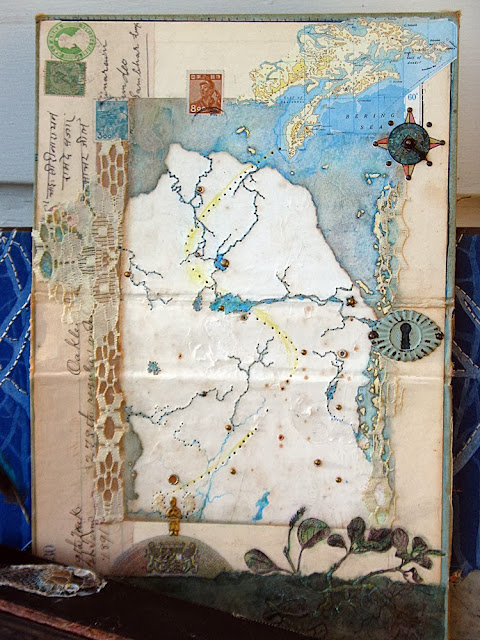 Nope.  I tried a figure, a dragonfly, maybe 8 or 10 other ideas, but - nope. Anything I could come up with was only overshadowed by the now too detailed (I thought) perimeter.  Everything I tried had to be ripped off, if I had gotten hopeful enough to even glue it down.  So there it sat. 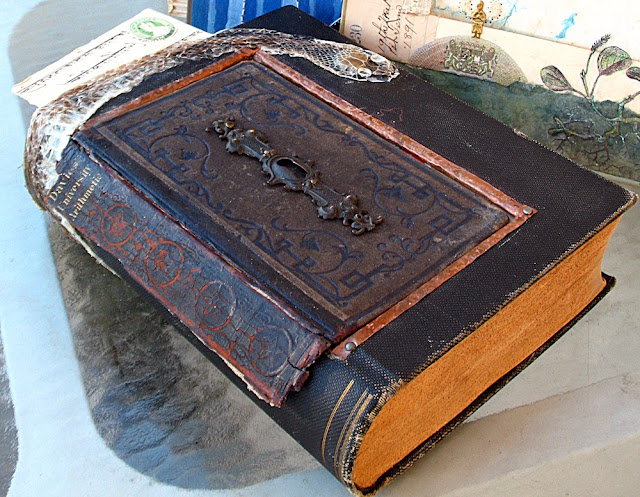 I started working on an idea I'd had for a long time, called Book of Secrets.  Finally I'd been able to find a black book large enough for the project, which had been my major roadblock up to this point.  I cut out the part of the front cover where I inteneded to insert the smaller book cover, and bent some copper sheeting around the edges. Meanwhile, I also did some alteration on the design on the small cover, and found a keyhole escutcheon to put in the center, as well as some locks and things that will go on later.

The hardest part thus far has been attaching the snakeskin; despite copious amounts of acrylic gel medium, I'm not sure how well-secured it is, or how well preserved.  The stitches around the bottom edge are there as much to hold it in place as for decoration. I'm not sure I would reccommend sewing a snakeskin onto a book, but if you do, it would probably be best to split the snakeskin so it's flat instead of tubular.  I'm just sayin'. 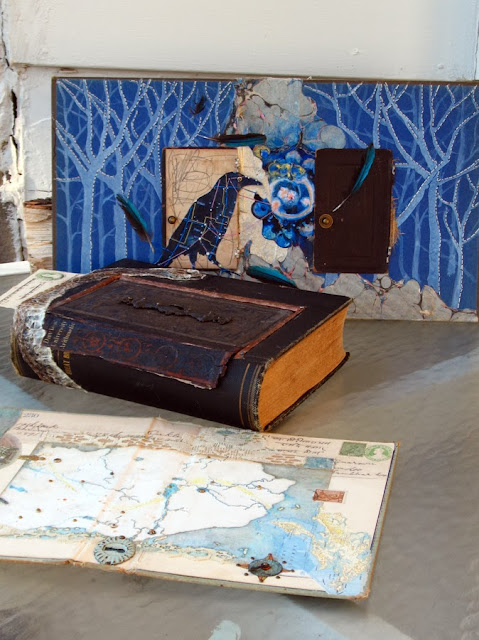 One Saturday morning when I got tired of fighting with the snakeskin, I started the piece in the back of the photos.  This one came together pretty smoothly; the thing that slowed it down was just the huge amount of stitching. 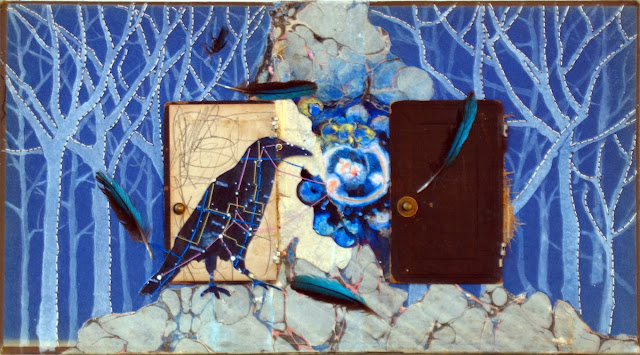 Here is the finished piece, entitled Revelation. I'm pretty pleased with how it turned out. I'll be showing you further progress on the other two soon, along with another new one!

What processes, methods, or approaches work best for you in the studio?  I'd love to hear your ideas!